Last one from the family of creational patterns is Object Pool. The main purpose of object pool and why designers choose to incorporate to the software is a performance boost. Construction and destruction of object can become very expensive operation in some cases (especially if it occurs very often). Constant building and throwing away instances may significantly slow down your application. Object Pool pattern offers a solution to this problem.

Object pool is a managed set of reusable objects. Clients then “check out” objects from the pool return them back when they don’t need them any more. But it’s not that easy as it sounds. The manager of the pool has to deal with various problems.

As you can see, there are some serious drawbacks in this pattern. It’s a huge amount of work in the first place, if you decide to implement all the above. You need to consider every aspect very carefully before you implement the object pool and evaluate whether it really is, what you need.

The resource manager can be implemented many ways. Static class or singleton will work. I personally chose singleton. Here is my implementation of object pool:

Earlier this week, I posted an article about string generation for brute-force attacks and a couple of example solutions. I emphasized, that the key aspect of brute-force is speed. We want to try as many combinations of input data as possible in the minimum amount of time. And part of this is also efficient algorithm that will generate input combinations. But the examples I posted were written in Python, which is kind of a high level scripting language, not nearly as fast as C.

Hence, here is my implementation of the same in C:

Prototype is one of the easier to understand design patterns. The intent of prototype is to create new instances of classes by cloning a prototype instance, rather than building them from scratch. This is particularly useful when the initialization of the objects is very expensive and very similar among the majority of created instances.

Take this for instance, you have some data stored on a remote server. You need them to initialize 1000 instances of some class during your program runtime. This data are static and very unlikely to be changed during the runtime of your application. You see, that downloading the data during initialization in constructor is pretty ineffective. Design like that would lead to exactly 999 pointless connections to the server and a lot of unnecessary network traffic, which is a gigantic waste of resources and time. If you use prototype instead, the application will download the data just once and the 1000 more instances will be cloned from the first one, saving us all the trouble.

There are three participants in the prototype pattern:

You also need a place where all the prototypes will be stored. A good practice is using a factory class that will cover the initial prototype setup  and will handle the cloning operations. This might remind you of the abstract factory design pattern. This is because they both are creational patterns and can be used to achieve the same behavior. The thing about prototype is that, you can dynamically change the prototype instance during the runtime and begin constructing something completely different with the same factory without sub-classing it.

Another way of dynamic handling a lot of prototype instances is prototype manager. A class that stores a pool of prototypes and makes decisions on which one to instantiate based on some parameters. This is particularly useful when the amount of prototypes isn’t fixed.

Now, let’s proceed to the code examples. I went with the first variant — a factory class for storing the prototypes.

One of the essential tasks in software development is documenting your code. With no documentation, hardly anyone will be able to understand your code and therefore contribute to your project. Sometimes you might find even yourself looking at your own code wandering, “What the hell is this supposed to mean?” Well, that’s where documentation comes in!

I assume you know the awesome-looking Python docs, right? Well, that documentation is generated by Sphinx! In this post I’ll try to explain how to get sphinx and most importantly how to get that sweet-looking documentation out of it :-).

Sphinx is distributed as a python module, so you can use easy_install to get it. Install sphinx and all the dependencies by writing:

Easy install is a part of setuptools. So if this doesn’t run anything you probably need to install them. Look for package python-setuptools in your distribution’s repositary.

Setting up the doc folder

Documentation is usualy placed in a separate folder in your project directory. It’s really up to you, but I recomend using doc/ folder. Then you need to setup basic files for sphinx in that particular folder (sphinx calls it a source directory). This can be done by sphinx-quickstart command that will guide you through the whole setup process. The important thing here is to answer yes to the question of enabling autodoc extension. This extension then collect the documentation from your code.

The above mentioned sequence of commands should create a basic directory structure of your sphinx documentation. Somewhere in that structure (it depends on how did you answer to the questions of sphinx-quickstart) will be an index file of the whole docs. By default it will be called index.rst. Content of this file is in reStructured text. It’s a syntax for formating plain text documents. It’s not very hard to learn. Using either rst quick reference, sphinx guide or my personal favorite way — ripping off python docs.

On every html page generated by sphinx is a link to the source rst file it were generated from. And so it is in the python docs. The link is at the bottom of the menu right above the search box. You see, the documentation of python is not only quite large, but also really well formed. So by looking at that you’ll be soon able to write some pretty good docs yourself. 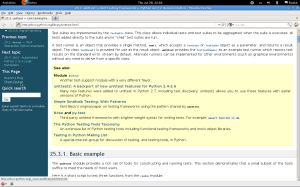 If you decide to crate a new page, you can simply add a file to the doc/ directory and sphinx will find it and include it into the documentation.

Documentation from docs string isn’t included automatically like in doxygen. You need to specify where to include what. In-depth explanation on how to do that is here.

Well, this was my very brief experience with sphinx. It’s a great tool for creating documentation for your python projects. Hopefully, I’ll get back to it at some point in the future and expand this article.

When it comes to releasing your software publicly, you need to specify at what conditions may others use, modify, copy and redistribute it. This is usually done by supplying some kind of a document along with your software called license. Writing a good license could mean a pretty rough times over a fat pile of lawyer books for a common software developer …

Luckily for us, there are a plenty of existing licenses, that you can use and under which you can distribute your software. Some are more restrictive than others and it’s only up to you which licensing path you want to take :-). Since you’re reading my blog about Linux, I’ll assume you probably want to distribute your application’s sources as well. There are numerous ways to go. So let’s have a look …

One way to publish your software is by forfeiting your copyright a thereby releasing it into public domain. Anything that belongs to the public domain is without copyright. That means, that everybody can do anything they want with is. This might be useful for someone.

The thing is, that by default, if you write a piece of software, you automatically become it’s copyright holder. This is stated in a thing called Berne Convention, which most of the countries have signed. So, in order to make your software public domain, you need to make clear, that you forfeit your copyright.

Another great ways to distribute your software. Generally, there are two ways. Using an open source license or a free software license. What is the difference between these two? Well, there are two separate camps — OSI (Open Source Initiative) and FSF (Free Software Foundation).

By making your project open source you allow others to “do whatever they want” with the sources (as long as you don’t violate the licensing terms). The open source is more practical. It gives the user a lot of freedom in copying and modifying the software.

On the other hand, making your project a free software will allow users to “do whatever they want” (under the terms of the license) and if they modify the software, they have to publish the changes and give it back to the community. This makes the derivative works also publicly available. The free software is more philosophical. It wants to make sure, that the software once released as free will retain it’s freedoms.

Here are some examples of popular and widely used licenses for your software. My personal favorite is GNU GPLv3.0. It’s a free software license, pretty restrictive about usage in proprietary software, but I like the philosophy behind it. It was initially written by this guy named Richard Stallman :-). The lesser version of this license (allowing linking in proprietary software) is GNU LGPL.

The MIT License is pretty straight-forward as well as permissive.